A brief rant about professional photography by Kevin Ames 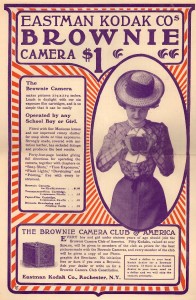 This is my first and as far as I am concerned, only rant. This rant began in 1888 when George Eastman invented a disruptive technology—black and white roll film. He made roll film holders for practically every plate camera in existence at the time. He also introduced the box camera ushering in the amateur photographer as a “competitor” to professionals.

The Kodak Box Camera a.k.a. “Brownie” was promoted with the words: “You press the button, we do the rest.” The camera preloaded wiith film for a hundred pictures cost $25.00. When the last picture was made, the camera was sent to Rochester along with $10.00 for processing, prints and another load of one hundred shots.

That’s really disparaging of people who want to embrace photography and do it themselves—for a hobby. Photographic gear is expensive. It’s only the natural next step for the hobbyists to see shooting jobs to make some money. The truth is that fans of photography have been disrupting the work produced by professionals since shortly after roll film was invented. Fine. This is really a good thing because throughout photography’s history disruption has forced the pros to step up their craft so their work was still something people would buy. True then. Truer now. The first disruption of professional photography started by the original Kodak camera was, relative to today, stable for close to a hundred years.

Barriers to becoming a professional photographer–then

During that time, photography had a considerable barriers to entering the field as a professional photographer.

Cameras then were manual. Different format cameras were pretty much required to be a pro. It was normal to have a 35mm camera for documentary & annual report style image making. It was also necessary to have at least a 4 by 5 inch format camera if not an 8 by 10 inch camera for most printed advertising or high quality print work. It was also standard to have a medium format camera that shot two and a quarter inch square or  rectangular photographs in differing lengths up to a panorama version up to almost seven inches in length. Each format required its own set of lenses.

The high cost of practicing photography

The price of film and procession was a huge factor in becoming a pro. It cost a lot of money to practice the craft. Film had to be purchased followed by developing and printing costs. Yes, it cost less to shoot black and white or color slide film. Still, shooting slides with a 35mm camera cost around a dollar a photograph. Medium format upped the ante to a couple of bucks a shot. Anyway, you get the idea. The bottom line was simply that the more someone practiced photography, the better a photographer they became. The more money they spent as well.

During this time photographers still had to understand how photography worked. A photographer then absolutely had to know what would be on the film before it was sent out for processing. It was normal to leave a set up in the studio for days at a time. A photograph would be made, the film went to the lab and once it came back the photographs were analyzed. Then changes were made to the set. The processing steps got repeated for each change. These changes were to the set and lighting. That the exposure and color was right and the image was in focus were there was a given. That was the craft, the skill part that anyone had to master to be a professional photographer. Later expensive Polaroid® instant film gave photographers a quick look at composition, lighting and contrast. Color Polaroids® gave rise to the song “shake it like a Polaroid® picture” and explaining to a client that “the final film wouldn’t look like that…”

Canon AE-1 ~ the next disruption

The next big disruption hit in 1976 when Canon introduced the AE-1. It was a 35 millimeter film camera. Canon upped the slogan war started by George Eastman. They promoted the AE-1 as being “So advanced, it’s simple.” The AE-1’s automatic exposure was controlled by an integral computer. Algorithms for making “better” photographs  had arrived. The barrier of having to understand photography was breached. 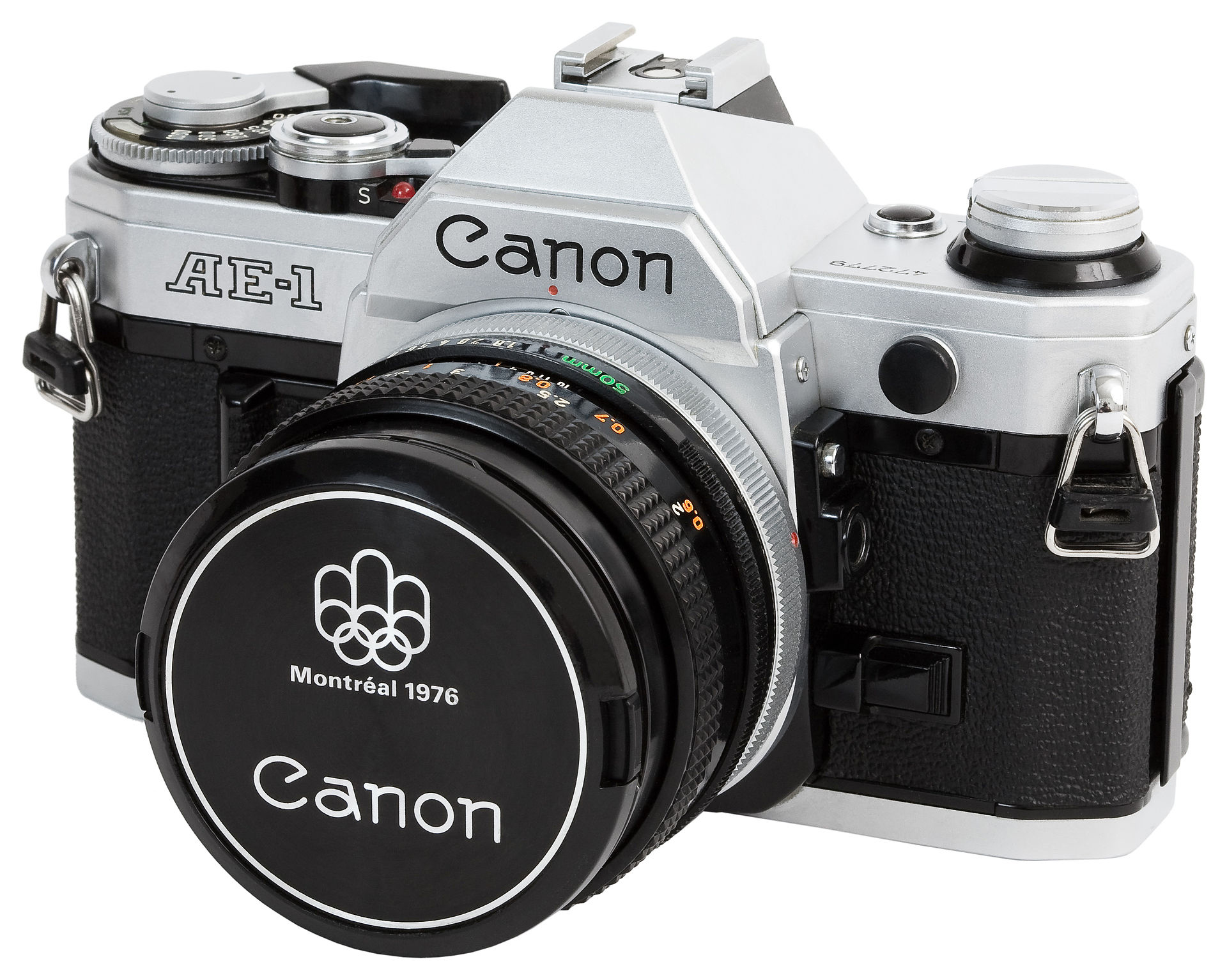 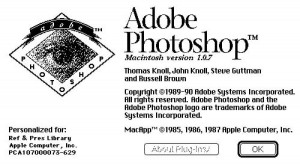 The splash screen for Photoshop version 1

Twenty-five years ago, in February of 1990, Adobe released their first version of Photoshop. The end of having to understand photography and how it worked was at hand for a least a generation. Learning Photoshop did not kill the need to learn photography. The reality was quite the contrary. Those of us who were in business and were prescient enough to understand that Photoshop would change the way photography completely, immediately began to learn to use the app. Photoshop allowed us to realize the photographs we imagined but could not create with cameras and film. Remember photographers then already understood how photography worked. We also understood how to shoot on an instinctive level. We learned Photoshop to create photographs that, in the age of film, were impossible to realize any other way. So began the new era of digital photography. 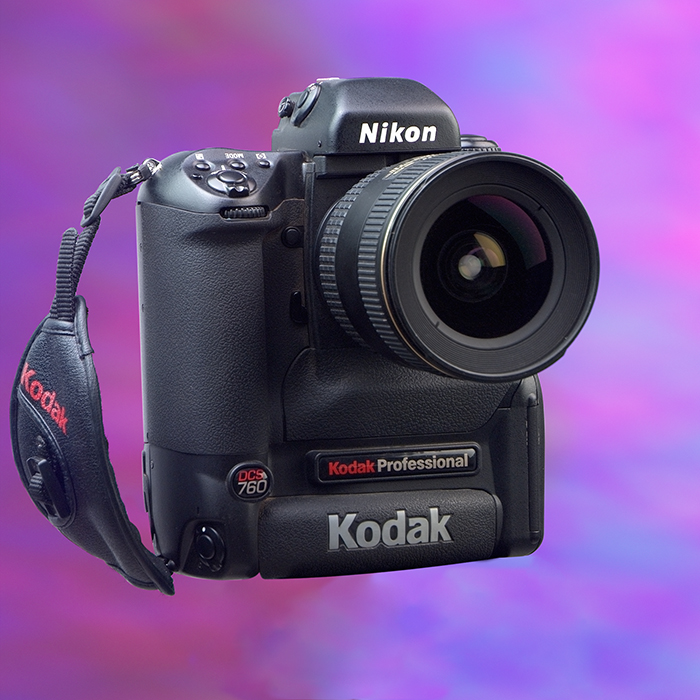 The next disruption of photography happened in March of 2001. Until that time a high quality (six megapixel) portable, digital single lens reflex was priced at $28,000. That was when Kodak drastically reduced the price of its DCS-760 camera down to $8,000. Ultimately this set the company on the road to bankruptcy eleven years later. My 760  is shown at the beginning of this rant. It’s price reduction marks the time that digital capture takeover had begun in earnest. The barrier of cost started to crumble. Practicing photography would no longer required buying film and paying to process it.

Best of all,  digital capture quality began to surpass that of film. Canon’s 11.1 megapixel EOS1Ds along with, ironically, Kodak’s 14n were the first to offer more resolution that 35mm film. A Kodachrome slide held about ten megapixels of data. As the next dozen years passed, the quality of digital capture increased as the price for the cameras dropped. 35mm form factor full frame DSLRs delivered better quality images both in color and resolution that even medium format film cameras. Today, some DSLRs surpass 4 by 5 and are at parity with 8 by 10 inch cameras. The price barriers to entry were no longer the price of equipment and the continuous, unrelenting expense of film and processing. Entry level photographers actually believe that all they need is an entry level digital camera along with a laptop running Windows or a MacBook Pro. No matter how good the automatic exposure or how well  sloppy exposures can be fixed in Photoshop, a professional photographer must master photography itself in order to have a successful career over time.

Photography, as a profession, has always had a siren-like calling. Outsiders see it as something  free spirits do. They think being a photographer means living life on their own terms. Photographers I know make photographs because of their love for it and money is second.

A sustainable photographic business has a single, all encompassing imperative: be a photographer. Be  professional at the same time. A photographer must have that instinctive understanding no, not an understanding, a photographer must have an instinctive mastery of the craft. Mastery means knowing how light works on an intimate level along with the ability to bend it to your vision. It includes creating exposures that record all of that light. It also requires an understanding of business. Business is pricing photography at a dollar level that allows the practitioner to pay their expenses and have money left over. Profit is the air, water and food for any business. Profit is definitely not a dirty word. Beyond all of these requirements, the photographer has to figure out how to find work. Then work with clients to fulfill their needs, to make photographs that illustrate their ideas, picture their stories and very important, make their products and services desirable to customers. All of this means the successful photographer must have a solid education (liberal arts are always good,) staying current with events and trends and keeping up with imaging technology. Don’t downplay creativity. Creativity is key.

I am totally lumping all camera phones together under this heading. I grant, up front, that camera phones can produce high quality photographs. This a barrier. The current perception by most people is a photo made on a phone. The standard of what a quality photograph is today is more and more defined by what appears on the screen of a phone or tablet. Instagram – Flickr – whatever posts mostly get raving “likes” and “awesome” or “great photo” comments. They suggest to the person posting them that they are in fact an “awesome” or “great” photographer. These “likes” feel wonderful. Unfortunately a large number of “likes” does not define good photography. Anyone can get lucky and make a great  photo. The professional photographer differentiates from “anyone” because the pro can make a great photograph consistently. iPhoneography is fun. It is good. Here’s the problem: Most consumers of photography really believe that it is “good enough.”

The disturbing fall of excellence

I’ve often heard people talking about photography say that a selfie is great for a profile photo on LinkedIn. Can a cell phone shot of a product sitting on a desk possibly be good enough to put on an e-commerce site? Some people, actually a lot of them, from looking at commerce sites believe this is true. Companies that value the power of photography show it in their advertising both in print and online. Does anyone believe that Apple uses iPhone photography of its products in their ads? The amazing images from the “Shot on iPhone 6” campaign happily excluded. For every sweeping statement, there are notable exceptions. Those are some. Anyway, the bottom line is good enough is never good enough.

There is still one last barrier to entry. It’s huge.  The public truly believes that a camera makes the photographer. They believe that buying a good good camera makes the purchaser an experienced, professional photographer. What would happen if the manufacturers of digital cameras were to include a card that is the first thing the customer sees upon opening the box. It would say, “Congratulations on buying this fine digital camera. You are now a professional photographer.” Opening the card the customer would find a scalpel attached. Underneath it the script would read, “At no extra charge you are now a surgeon too.”