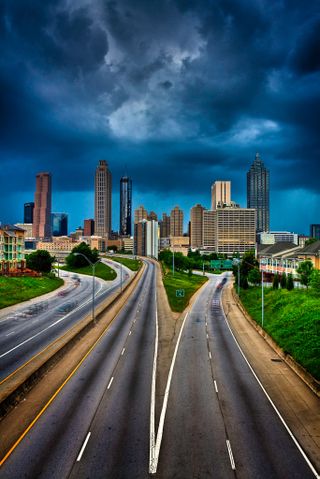 Sometimes the best photographs are made at the most unexpected times. It was late one Sunday afternoon on the Jackson Street bridge. It’s a favorite spot for shooting the city. I was making Atlanta skyline photographs. The clouds rolled in while I was shooting. The clouds became more and more intense. Then the deluge happened. Huge, soaking raindrops fell drenching me as I ran to the car a block away. This was the last series of exposures and well worth the drenching. The dramatic clouds really make the photo for me.
The illustrative effect is done first by shooting five frames with the exposure 1 f/stop apart. Then I combined them in Photomatix using its tone compressor.