Forty years ago… by Kevin Ames

Forty years ago yesterday a Saturn 5 rocket topped by the Apollo Eleven mission lifted off from Cape Kennedy (now it’s back to its original name Cape Canaveral.) I was in the summer before my senior year of high school. I watched Walter Cronkite on a black and white Admiral set at home in Boise, Idaho. Three days later I would watch alone with practically the entire world, joined around radios and televisions to witness for themselves the historic first step by a man onto the moon. Mom’s copy of 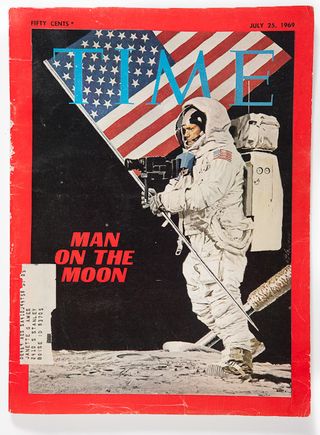 Time magazine came to the house in the middle of the next week.The address sticker is still on it.Yep I still have it. As a matter of fact, I photographed it just a few minutes ago. Needless to say it’s a treasure.
It’s dated July 25th, 1969. The cover features a painting of the event. At the time the issue was published the film from the moon was still in quarantine against the possibility of an unknown lunar virus. We had to wait to see photographs. Interestingly about the only photograph of Neil Armstrong, first to stand on the moon, is his reflection in the mirrored helmet of Buzz Aldrin. Aldrin was apparently seriously miffed about being the second man on the moon so he didn’t photograph Armstrong. The iconic photograph that most relate to as Armstrong is actually his photograph made of his moon walking partner Buzz.

← Wonder wall
The moon landing and my first camera →