Gear I won’t live without by Kevin Ames

Readers of my blog know I have been traveling a lot this year. Florida, the Philippines, L.A., Kansas, and this weekend found me much closer to home in the Blue Ridge mountains of northwestern Georgia a couple of hours outside of Atlanta. This is last night's sunset. 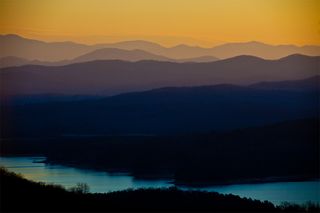 The photographs I make on these trips are important not only to me for the personal work; they are important to my clients as well. That means–no matter what happens–I have to bring back the digital files.

As often as I can I shoot with my camera tethered directly to my MacBook Pro into an OWC Elite On the Go external hard drive. I buy their 0 GB enclosures and put the highest quality SATA drive I can find in it myself. This is a bit more work, slightly more expensive and worth to me knowing I have the best combination of enclosure and drive available at the time I build it. I've been using OWC On-the-Go ATA enclosures for years. I trust their dependability.

Even when shooting this way into a drive I trust to be extra safe I have the camera make a copy onto a memory card at the same time. This insures I have two sets of camera originals–one on the external drive and one on memory cards. 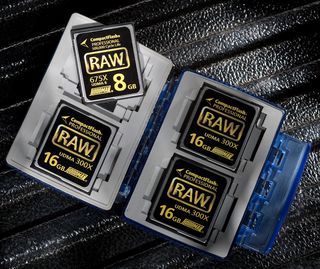 I make sure my camera has the fastest, highest quality CF or SD card available. I use Hoodman RAW memory cards exclusively. I took four 16 GB 300x cards and one of their brand new 8 GB 675x CF memory cards on all of these trips. What I discovered with this blazing 8 GB wonder was that even shooting sets of 3 HDR brackets or a model moving quickly while shooting as fast as the flashes recycled, I never buffered out. And that's with a Canon 5D Mark II producing a 21 megapixel file for every shot. They are available in 4, 8, 16, and 32 GB sizes.

Hoodman has pushed the technology of their cards so they have a half a million cycle life. Other cards have a ten thousand cycle life. A cycle is filling up the card, downloading it then reformatting before shooting again. Each cycle of use slows the card's performance slightly. The 500,000 cycle life of the RAW card means that slowdowns are essentially impossible. It also means extreme dependability.  These military spec cards have never had a failure. Not one.

I have had failures with other cards and believe me it's not good when that happens. The failure rate of finding a bad card is somewhere between 3% and 5%. That's 95 to 97% dependable which is not bad. And it's not 100%. When I was shooting film, it usually came in 20 roll bricks often packed as 4 boxes containing 5 rolls each. 95% to 97% dependability in film would have meant that out of a hundred rolls between 3 to 5 rolls would be bad. No film manufacturer could have stayed in business with that tolerance for failure.

In my entire film shooting career, I never had a bad roll. I shot thousands of rolls. There was one time when a roll was destroyed in processing. Other than that shooting film was 100%. Personally, the quality of memory cards has to be 100%. My living depends on it.

With everything that can get fouled up on a shoot it's great peace of mind knowing the memory card will not fail. That means I have one less worry on a shoot. I know that when I shoot to a Hoodman RAW card, CF or SD I'll be able to download the take flawlessly when I get back to Atlanta.

I'll share other gear I use with you from time to time. I believe it's important to share gear preferences as well as techniques.