Happy New Year! and yes I know that was day before yesterday… by Kevin Ames

Happy new year everyone.
May yours be prosperous (probably won’t be very hard to beat 2009) filled with love, joy and happiness. Especially happiness. Things have been really busy since we last got together… I was I believe in Kansas on assignment. After returning I was in New York for Photo Plus Expo where I presented a class on Lighting, Exposure and Lenses then did a hands-on Photoshop class showing how to make “fantastic” science fiction-like portraits. Check out my new year’s post for 2009 for an example. 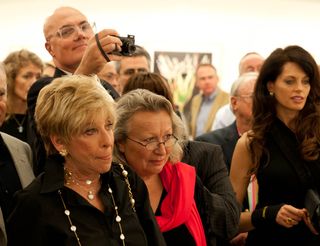 After Photo Plus travel wound down a bit except for a quick weekend trip to West Palm Beach, Florida for the grand opening of the brand new 30,000 square foot Palm Beach Photographic Centre in downtown West Palm. It’s a beautiful facility. The mayor was there as were several notable photographers 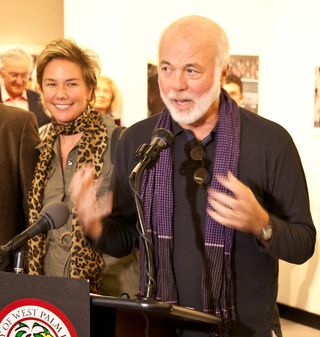 including Ross Whitaker (top photo with camera) Karen Ballard, David Hume Kennerly,(center photo) Anna Tomczak, Harrison Funk, and of course I’ve left out a few. PBPC Executive Director Fatima Nejame looks on as Chairman of the Board Jay Koenigsberg addresses the gathering.(bottom photo) Anyway the reason for all this is that the Centre’s premier event FotoFusion

takes place January 19-23 for the first time in the new facility. While a lot of the photographer’s who participate in the event will undoubtedly miss hanging out on the veranda of the Colony Hotel in DelRay, we are all excited to be part of this new beginning.

Last new year I quoted the band Semisonic’s song “Closing Time” where they sing “Every new beginning starts with some old beginning’s end…”
I think that’s true for a lot of old beginnings and more so with the trying times we’ve all experienced. So my wish for us all is to see endings as beginnings and frightening as new situations always are that we can all face them with courage, determination and a great sense of humor. It’s gonna be fun! Great fun!

There is just one more thing… Apple celebrates its thirty year anniversary today. Apple Computer, Inc. was incorporated on January 3, 1977.

← A stainless steel tree and (bad) weather in Kansas
FotoFusion 2010 →