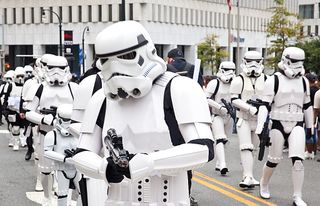 Yesterday while walking down Atlanta’s famed Peachtree Street a commotion happened. I looked up and made this photograph before being threatened by a storm trooper in full battle gear. It pays to carry a camera.
Ok. You guessed it. It’s Labor Day weekend and the world’s largest gathering of science fiction and fantasy fans, DragonCon is happening as it always does here in Atlanta. People gather from all over the country to participate in panels, costume contests, author panels and of course to march in the parade where this photograph was made. Not even General Sherman was able to close Peachtree Street when he burned Atlanta. He didn’t have storm troopers or a parade permit for that matter.
← Late one Austin evening…
Kevin Ames on The Real Housewives of Atlanta →