News of large and curious relevance is on my mind today.

Photoshop CS5
Adobe has released the twelfth version of the world changing digital imaging software Photoshop CS5. Trial downloads are available from adobe.com. I’ve been working with the beta versions and it’s wonderful. If you are a wide angle lens lover, you are going to be swept away by the lens correction tools in both Photoshop and Camera Raw. This photograph was made this February on   in the Philippines. These ruins were caused by intense shelling of the island Corregidor by the Japanese at the beginning of World War II. 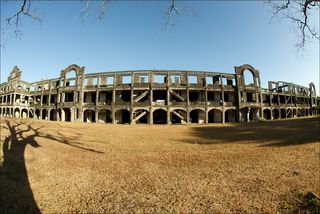 They were shot with a Sigma 15mm f/2.8 fisheye lens February 4, 2010. These types of lenses even when level with the subject, introduce curved distortion rendering a scene with an angle of view of 180º. Adobe engineers have profiled lenses from Canon, Nikon, Sony and Sigma to correct these distortions as well as lens edge vignetting and chromatic aberration with one click.
In addition to the one-click simple solution, sliders are provided for each correction that act as volume controls to turn up or lower the effect. If that weren’t enough, a Manual tab offers individual adjustments for distortion, vertical and horizontal perspective, rotation and scale. Once the desired result is reached, the settings can be added to the lens correction profile.

Polaroid Reborn
If the new arrival of Photoshop weren’t enough, instant film photography has been reborn thanks to Summit Global Group who own the Polaroid trademark and technology. At an event in New York City’s SoHo district day before yesterday, notable photographers Joel Meyerowitz and Mary Ellen Mark joined John Reuter, director of the fabled Polaroid 20 by 24 inch studio to celebrate the imaging icon’s reemergence.
Every year at FotoFusion John has shared his struggle to keep this photographic icon alive in the wake of the digital tsunami that has devastated traditional chemical based image making. I believe that we all benefit from as many forms of photography as we can experience. One of my goals that I saw slipping away was to make a one-of-a-kind-never-to-be-duplicated photograph with one of John’s behemoth cameras. Read more…