The concept for the latest Sigma lens ad for Rangefinder Magazine was simple: make a photograph of a model as “part of the art” in Atlanta’s High Museum with the brand new ultra-wide angle 8-16mm f/4.5-5.6 zoom. 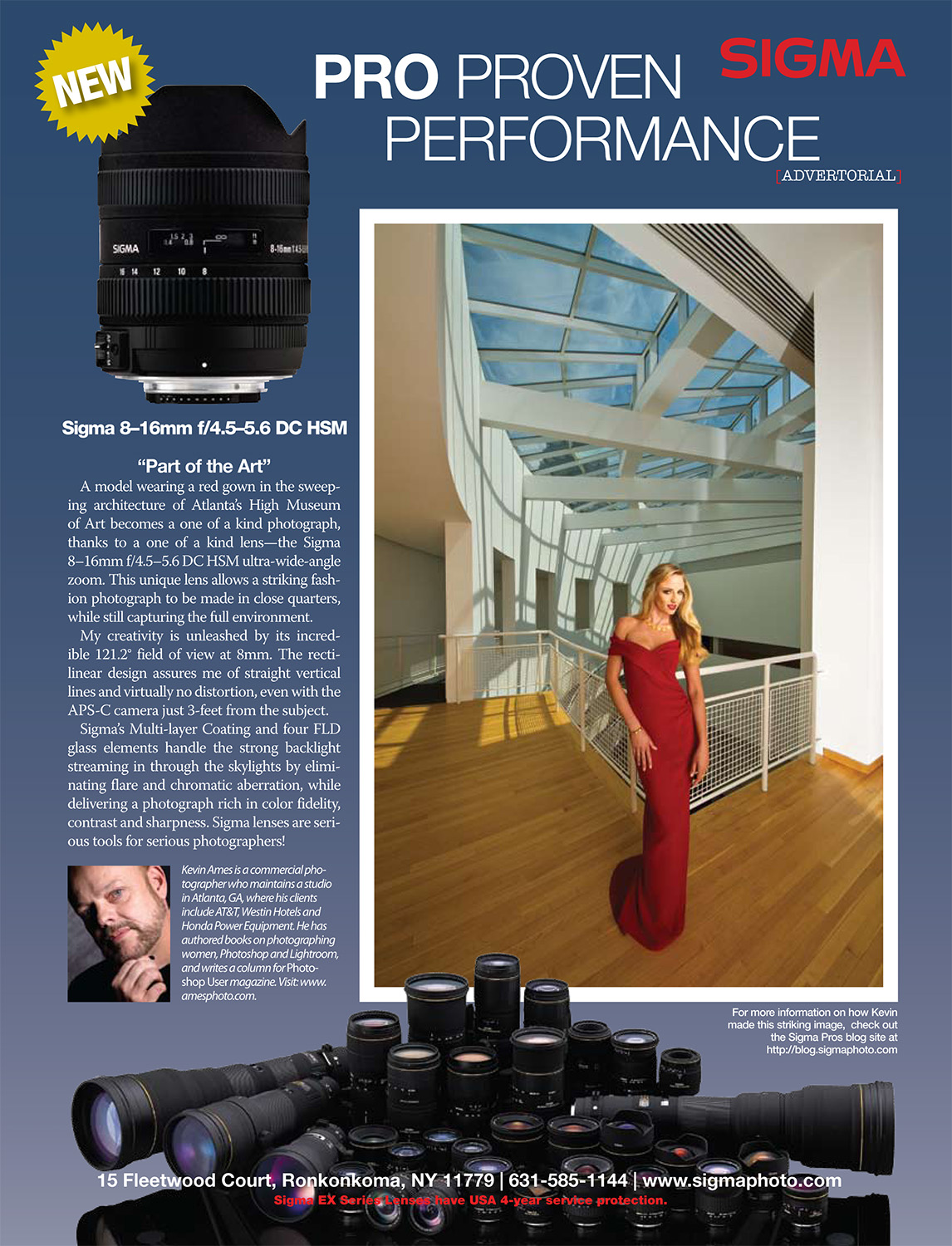 I’ve had the good fortune over the years to get to know the Woodruff’s Vice President of Marketing Virginia Vann through her work at the Alliance Theatre. She smoothed the way for me to scout the location.

With the new lens zoomed wide to 8mm on a Canon 7D body, I started on the first floor and made photographs all the way up to the top. I’d checked the position of the sun using the LightTrac for iPad app so I knew the best time of day would be around three in the afternoon.

I’ve posted the scouting website the Sigma marketing team used  here… so you can see more of the amazing interiors of the High museum.

Once we all agreed that the fourth floor of the High’s Stent Pavilion, designed by renowned architect Richard Meier was the perfect choice, the next step was getting permission and access. Again Virginia helped by putting me together with Nicole Taylor, Assistant Director of Public Relations at the museum. Their requirements were more than reasonable, especially that we shoot when the museum was closed and that the High be credited on every use. Other considerations included where makeup could be applied, length of the shoot and security. I asked for a three hour window in which to shoot. Nicole and her staff could not have been more accommodating. I am truly grateful.
While access was being arranged, I spoke with Kitty Bundy at Stewart Talent in Atlanta to arrange for a model for the shoot. She emailed me comp cards and one model jumped off her card… Jessica Cascaes.
June 28, 2010
On the morning of the of the shoot, makeup artist Donna Stazzone, stylist Martha Gill, digital photographic assistant Theresa Sicurezza, videographer Paul Copeland, Jessica and I met at my studio. Donna did most of Jessica’s makeup and put her hair in rollers there so only touch ups would be required on location. Martha prepped the shoes by putting gaffer’s tape on the soles and heels so they would not be scuffed when Jessica stood in them. Since they were loaners we wanted to return them in perfect, brand new condition. The only time shoes are on the model’s feet is during the actual photography. The stylist brings them on set, helps the model put them on in place then after the shot is complete, removes them and packs them up. The model never really does more than stand in the shoes. When that was finished Martha and I choose the rest of the props deciding which of the half dozen or so pairs of Wolford leggings and hose Jessica would wear. These were not loaners and anything worn had to be purchased. Once Jessica’s hair and makeup were finished; Theresa, Paul packed the gear into two vehicles then we headed to the museum. Watch the video I produced for Sigma about the shoot on Vimeo.

Nicole met us at the original entrance to the museum, (it’s now an exit) and we moved, cameras, tripods, lights, power packs, extension cords, stands, modifiers… you get the idea, into the freight elevator. The rolling rack with the dresses and accessories went into the downstairs women’s restroom. With only three hours until we had to be out of the facility we went to work.

I wanted Jessica’s face to be the brightest part of the photograph. A 22″ Mola beauty dish with a honeycomb grid was placed above her and to the right of the frame. This light creates a spotlight effect on her face that falls off dramatically at her shoulders. This is the main light and I measured the exposure with a Sekonic L-758DR meter in incident mode. I pointed the white dome at the gridded beauty dish and pressed the button. The meter has a built in Pocket Wizard transmitter that trips the 1000 watt-second Dynalite Roadmax power pack. The reading was f/11 at 1/200th of a second so that’s the exposure I set on the camera.  The background is lit by sunlight coming in through the dramatic skylights. I made a reflective reading with the same meter on the curved white wall behind Jessica. At f/11 (the aperture setting for the flash) the shutter speed was 1/400th. That meant the white sunlit wall would be 12.5% gray. At 1/200th (shutter setting on the camera) the white would be 50% gray or one stop brighter than middle gray. I slowed the shutter another 2/3 of a stop to 1/125th to brighten the background while not letting it be brighter than Jessica’s face.
The last part of lighting the shot was to add fill so Jessica’s gown and the foreground would show. 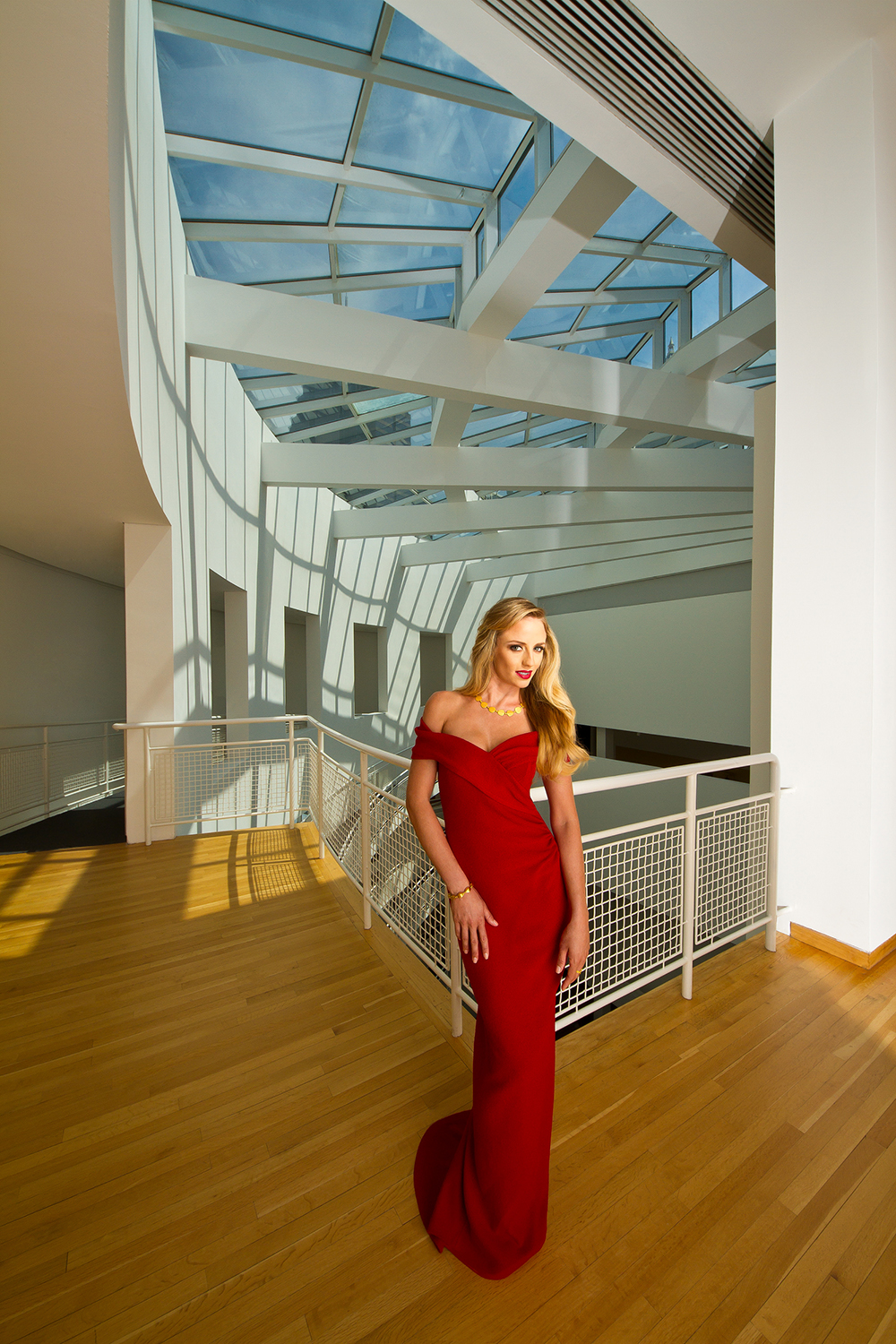 Theresa and I set up a 72 by 72 inch Chimera diffusion panel. A recessed Dynalite head plugged into another 1000w/s pack powered that light. I measured the fill until it read f/8.0 or one f/stop darker than Jessica’s face. All that was left was to put on the 20 karat gold necklace, earrings, bracelet and ring supplied by Starr Moore and Associates and start shooting.
I moved Jessica and the camera in very small steps because when working with a wide angle lens zoomed all the way out to 8mm composing the photograph becomes a game of inches. For this kind of work I always use a tripod. It seems sometimes that the shoot slows way down because of constantly adjusting the height of the camera and positioning the tripod just so. The results are worth it. The vertical lines are vertical because the tripod holds the camera absolutely level.
Another technique that appears time consuming is shooting tethered directly into a laptop. Believe me this is critical because my digital assistant Theresa can monitor the final images as they are being captured and tell me if something isn’t working. Can you imagine going to all of this work then finding a problem when the card is downloaded?
Here is a diagram of the lighting setup for the shoot… 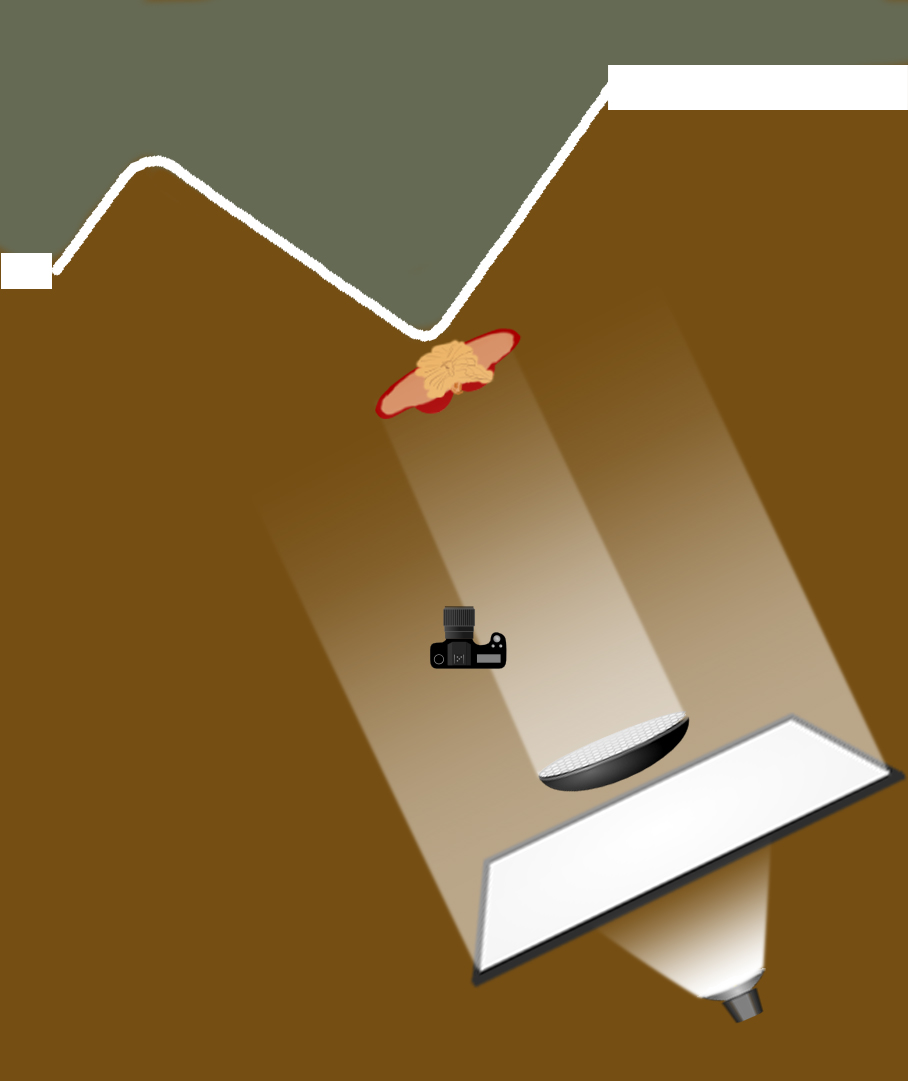