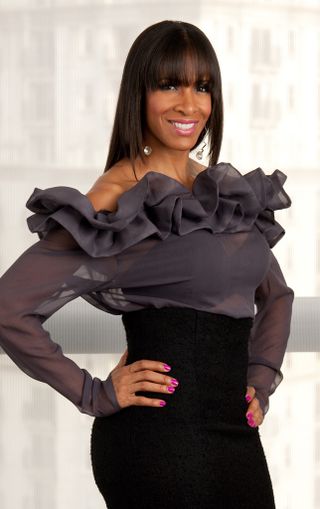 Shooting in a hotel room even when it’s a suite can be a bit of a challenge. This portrait of Sheree from Bravo’s cable show The Real Housewives of Atlanta is a good example. For all of the W’s elegance, the backgrounds threatened to overpower Sheree visually at least. She was wearing a dark dress with a ruffled top that almost perfectly matched the dark tones of the wall covering so I chose to photograph her with the Mayfair condominiums forming a pattern behind her through the window. My assistant, Theresa Sicurezza, and I placed a Chimera light panel at a 45º angle to the glass to eliminate reflection from the electronic flash. The shutter set at 1/125th of a second controlls the background brightness, while the aperture of f/8.0 handled the flash. The ISO was set at 400. 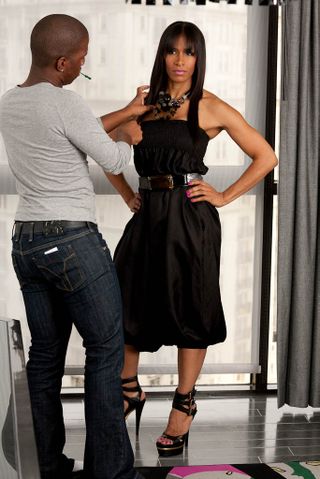 Sheree gets a touchup in the last outfit of the day. Notice the bright fuchsia and green accents in the rug. This hints at the bold decor in the room and why I chose the windowed background.

The shoot wrapped about ten minutes later. We packed up the bell cart, then headed downstairs. The bellman and the valet both received generous tips. Tipping well is an often overlooked key to a successful shoot especially if you are planning to return.

← Kevin Ames on The Real Housewives of Atlanta
In Las Vegas for Photoshop World! →