The moon landing and my first camera by Kevin Ames

As I write this, the space shuttle Endeavor is in orbit along with the International Space Station. This makes the most humans in space at one time, ever. Forty years ago this afternoon Neil Armstrong piloted the Lunar Excursion Module (LEM) Eagle to a safe although tense almost out of fuel landing on the lunar surface stating, “Houston, Tranquility Base here. The Eagle has landed.” NASA has enhanced audio and video on the Apollo 11 landing.
I was and still am an avid fan of the space program. During the Mercury, Gemini and Apollo projects I was allowed to stay home from school to watch Walter Cronkite’s coverage on television. Like so many, I am saddened by his death last Friday and heartened by his abilities to communicate the events of his time to the American People.
That Sunday morning July, 20, 1969 found me meeting Ron Peirce manager of 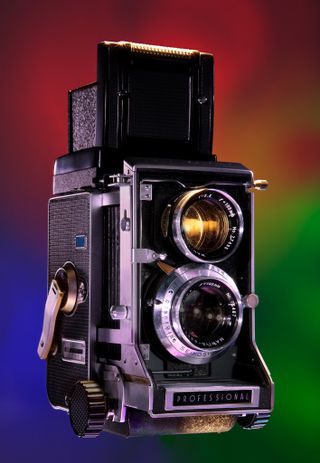 Boise’s Ballou-Latimer camera store to take delivery of the first camera I’d bought with money earned working at my father’s fruit stand in Emmett. Ron had met the Greyhound bus to pick up my precious camera and bring it to me. He understood how special a first camera could be to a high school student. I will always remember his kindness that morning.
The camera was a Mamiya Twin Lens Reflex C-33 with interchangeable lenses. I liked shooting people so Ron had suggested I get the 105mm lens that was a bit more telephoto than the normal 80mm. I traded that camera three years later for my 4 by 5 Beseler enlarger. While I made many wonderful prints until I stopped using my darkroom in 1999, I always regretted not keeping that Mamiya. The one in the picture I bought used several years ago at Samy’s in LA. You see, that was the only film camera I’d ever traded. I have all the rest of them in my collection.
That afternoon in the airport bar in Idaho Falls I got to watch the landing. That evening at Staley Springs Lodge on Henry’s Lake in Idaho I saw Neil Armstrong become the first man on the moon. I took photographs of the landing on the TV screen that day and they have been lost in too many moves I am saddened to say.
Singer songwriter John Stewart memorialized the world’s reaction to the day in his song Armstrong on the 1973 album Cannons in the Rain. Have a listen on iTunes and read the lyrics.